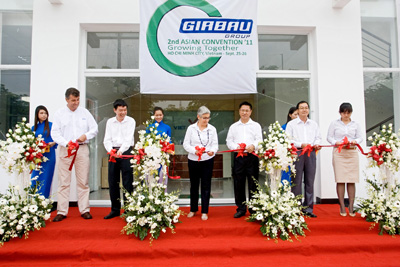 Vietnam, September 2011 .- The Girbau Group brought together Asian subsidiaries and distributors in the 2nd Asia Convention, which took place between September 25th and 26th in Ho Chi Minh city (Vietnam).

During the convention, participants reviewed the history and development of projects since the holding of the first convention inBangkok(Thailand). They also discussed the future strategy for promoting the growth experienced in recent years inAsia.

The 2nd Girbau Asia Convention is one example of the company's commitment to geographical and cultural closeness with subsidiaries, dealers, clients and consultants.  The policy of opening subsidiaries, which has intensified over the last two years, along with the extensive network of Girbau dealers around the world, allows us to work up close in new markets. The Group’s Export Vice-president, Santi Carol, stresses that "we are continuing to participate in international trade fairs, but our priority is initiatives like this convention, where our teams from all around the world can get together and exchange experiences."

A demonstration of the cultural closeness that the group has fostered since its inception, with teams made up of people from many different countries, was that the convention presentations were conducted in English, Mandarin and Vietnamese.

In addition,  between September 28th and 30th the Group also participated in the Vietnam Food & Hotel Trade Fair, where it took advantage of the opportunity to present the latest developments in efficient laundering, plus new product lines for washing, ironing and folding clothes. The Group’s Export Vice-president rated the event positively: "The fair has been a success both in terms of the number of visitors and of new projects. The future prospects in the region are very good”.